I have been awfully quiet when it comes to blogging over the past couple of weeks, as I was very busy to prepare the Byting Willows Exhibit.

We were able to place advertisement into the current issue of Native Peoples as well as the upcoming issue of CNAM magazine.  FAAM magazine is showcasing the entire Byting Willows project as a two page spread in their “Native Design” section of issue #6.
It is a blessing to have a graphic designer as part of this venture and my partner in crime Damian Jim has tremendously helped to keep the look and feel of the postcards, invites and posters homogenous. We went for an art deco look as a couple of abstract designs have that symmetrical and linear look and feel to them. 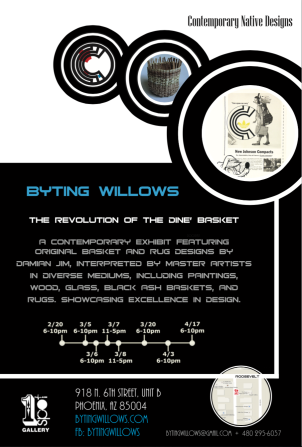 Despite all of the in-house expertise, we ventured out to create a state of the art press kit and hired graphic designer Eunique Yazzie who miraculously pieced everything together to create a cohesive story and integrated hyper links to websites as well as embedded videos into the kit. The result looks exciting and I doubt will be overlooked by the newspapers who receive it.
And then there is artwork arriving nearly every day. To be honest, it feels like Christmas! We are stunned by the creativity of everybody involved, every time we open a package. Some of the pieces are incredibly close to the original design and some of them venture out far beyond and transform the design into  different object all together.
The exhibit will open on February 20th during third friday artwalk. This will give local people the opportunity to check the show out before two weeks later, when their schedules might be too busy with the Heard Indian Market and all its related activities the weekend of 3/7-3/8.
The same weekend, 1Spot Gallery will host Randy Boogie Barton, one of the collaboration artists of the exhibit to re-paint the front of the gallery during Paint Phoenix.
Our big opening night will be Thursday March 5th with a special collectors event from 4-6pm, followed by the opening from 6-10pm during which well known local DJ Byron Fenix will entertain.
That is it for today, I am off to work on the introductory part of the exhibit which will highlight the development of the Dine’ baskets from historical times to today.
Stay tuned and I hope to see you all soon at 1Spot Gallery
Katja